Described as “… a musician of exceptional intelligence who stands out whether playing chamber music or solo…, Patil Harboyan is a Montreal-based Armenian pianist who leads a versatile musical career as a performer, chamber musician and teacher.

Recipient of two Canada Council for the Arts grants and a grant from the Conseil des arts et des lettres du Québec, Patil Harboyan was awarded first prizes at the Margo Babikian Piano competition, the Armenian Allied Arts Association and also won recognition at the Southwestern Youth Music Festival in California. She was supported by scholarships from the Fondation de soutien aux arts de Laval for three consecutive years, between 2006 and 2009. In 2004, she won first prize at the Trois-Rivières Symphony Competition, along with the Radio-Canada Prize. Consequently, her recital at the Chapelle historique de Bon Pasteur was recorded and broadcast by Radio-Canada and she appeared as a soloist with the Quebec-based Trois-Rivières Symphony Orchestra. 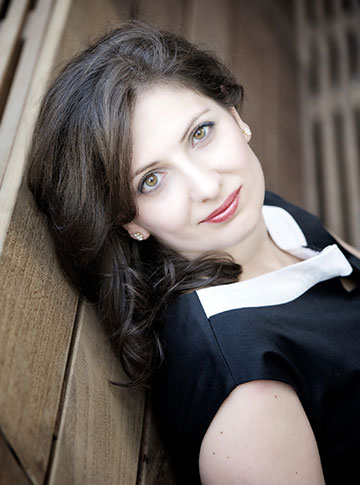 Ms. Harboyan attended the prestigious R.D. Colburn School of Performing Arts in Los Angeles, and was a recipient of a Philiban Scholarship. She holds a BMUS and MMUS in performance from McGill University, a D.E.S.S. from the University of Montreal and a Doctorate in Musical Arts from Stonybrook University, where she studied with Gilbert Kalish on a full scholarship. Her previous teachers include Victor Bunin, Eugene Plawutsky, Richard Raymond, Marc Durand and Jean Saulnier. Ms. Harboyan has also had masterclasses with internationally acclaimed pedagogues and musicians such as Friedrich Wilhelm Schnurr, André Laplante, Marco Tezza, Jean-Claude Pennetier, Boris Berman, John Perry and Anton Kuerti.

Patil Harboyan has appeared in solo recitals and chamber music concerts throughout North America. An avid chamber musician, she has had extensive coachings with members of the Emerson Quartet, Colin Carr, Ani Kavafian, Antonio Lysy and Pamela Frank.

Ms. Harboyan has collaborated with some of the best musicians of our time, such as Kimy McLaren, Isabel Bayrakdarian, Aline Kutan, the Fibonacci Trio and members of the Fitzwilliam Quartet. She is a founding member of the Ararat Trio, as well as the Trio de L’Île- both based in Montreal. Her recording “Music from Armenia” (Divine Art Records) with cellist Heather Tuach was described in Gramophone as a “delightful disc of discoveries”. The duo presented the recording in concert at Carnegie Hall in 2015.

Parallel to her performing career, Patil is also an active pedagogue. She teaches in her private studio and is on the Piano Faculty at the Schulich School of Music (McGill University) as well as at the Université du Québec à Montréal.